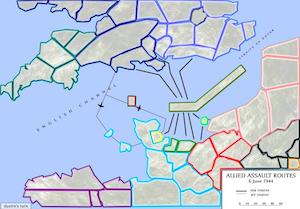 Last summer I participated in a full-day guided tour along the second world war (WWII) invasion beaches in Normandy, France. Specific subjects of the tour were Omaha Beach and places where events of “Easy Company” (E Company of the 2nd Battalion, 506th IR , 101st Airborne Division, US Army) a.k.a. the Band of Brothers took place. These true events are described in a book by Stephen Ambrose from which the famous TV-series was made in 2001 (the book is also worthwhile!). The tour was organized by Overlord Tour . This tour, in a company with mainly American WWII-buffs, was very in-depth and worldwhile, in particular in combination with the landscape. The Dutch painter/writer Armando once coined the phrase “guilty landscape” (“schuldig landschap”).

Since I have an interest in WWII history, geography, geospatial, GPS and multimedia, I made a trace with my Garmin eTrex Legend® HCx , shot photo’s/video and uploaded all to georambling.com , one of my pet projects. You can view the trace with geotagged media there as well. I’ve also created a video with iMovie from all materials including the GPS traces (see below).

Subsequently I got a message from Google that my video was banned in Germany ! First I thought because of some swastika’s appearing (carried btw by American soldiers as a trophy after conquering Marmion’s farm), but the reason was more modern: it has to do with a long-standing dispute between Google and the German collecting society, GEMA . This makes more sense and may also explain the ads popping up to buy the music (roll over Beethoven). So it is not a “Don’t mention the war” thing. BTW I am a pacifist.