I use Ansible already for years to provision server instances and for subsequent CI/CD. A recent example is the Geonovum OGC API Testbed . Here (selective) Docker Containers are automatically deployed on GitHub pushes using Ansible called from within a GitHub Workflows. 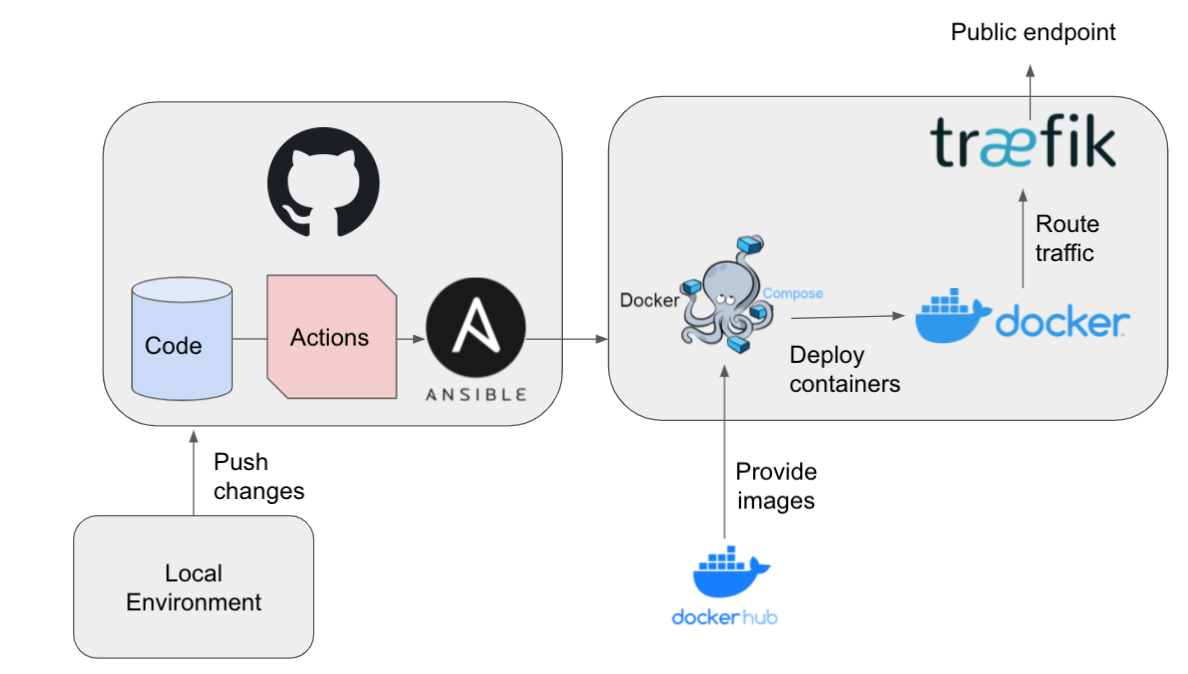 Now investigating how Terraform could play a key role in (Cloud) infrastructure management. There is a small overlap between Ansible and Terraform but that is a matter of how they are applied in concert.

Ansible is more geared towards maintaining the OS and its running components e.g. Docker Containers on VM-instances. Terraform is more geared to maintaining a Cloud infrastructure, "in the large": acquiring VM-instances, networks, DNS. If you are familiar with AWS, Google Cloud Platform, or in our case Hetzner Cloud , it is what you can do by clicking in their respective UIs or via their APIs like Hetzner's hcloud . And btw: both Ansible and Terraform are Open Source.

Quote from random web-search : "Terraform is designed to provision different infrastructure components. Ansible is a configuration-management and application-deployment tool. It means that you'll use Terraform first to create, for example, a virtual machine and then use Ansible to install necessary applications on that machine."

Both Ansible and Terraform are "declarative", i.e. configuration-based, where the configuration describes a desired state. ctions are "idempotent", i.e. the same action can be applied multiple times, but when the desired state is reached it won't have effect.

As I plan to apply Terraform in other projects as well, I took a deep dive, following hands-on tutorials from the Terraform website. In a very short time I was amazed by Terraform's power and elegance! My ultimate goal was to manage (acquire, configure, access, destroy) the lifecycle of Hetzner Cloud Virtual Machines (VMs, VPS's). This all took about less than two hours, documenting my steps along the way.

I started at the Getting Started page. While there is a lot of stuff on AWS, Terraform Cloud, I basically stuck to these four steps. You may even skip the third (GCP) step. Important is to learn the terminology and config conventions.

On a Mac with Homebrew install the Terraform CLI:

I started project dirs under ~/project/terraform/learn/.

This defines that we will use the Terraform Provider plugin named "docker" with source kreuzwerker/docker . `Terraform has a registry of official (Provider) plugins.

Now initialize and install the plugin:

You may validate your config:

Moment of truth: create the resources:

Verify the existence of the NGINX container by visiting localhost:8000 in your web browser or running docker ps to see the container.

That's it for Docker. Next is to use a real Cloud Provider.

This was actually more elaborate than the Hetzner Cloud exercise. I had a GCP account, so this went smooth: first creating a Network and later a VM Instance. In this step also learned about using Terraform Providers, Resources, Variables(-files.) I leave this as an option and skip to Hetzner Cloud which is the goal of this post.

The Hetzner Cloud plugin provider was not in the tutorials, but it was still not too hard to extrapolate from Step 3, from various Hetzner tutorials and from the hetznercloud/hcloud Terraform Provider.

My goal was to create a Debian VM, login there with root and SSH key and destroy it afterwards.

Then a file called terraform.tfvars. This is a file with "secrets" normally not checked-in a repo but there are many other possiblities to deal with secrets/credentials:

Try to login on your new VM (IP may also be gotten from output.tf, another exercise):

Then destroy your VM:

There is much more one can do with the Hetzner Provider: basically everything that is available in the console UI and hcloud API: creating Volumes, managing networks, adding SSH-keys, snapshots, using cloud-init etc. See the manpage in particular the Resources drop-down menu: registry.terraform.io/providers/hetznercloud/hcloud/latest/docs

Beware that some Terraform actions are destructive: e.g. upgrading the OS will destroy the existing VM and create a new. For those cases Floating IPs and auto-provisioning with Ansible will help. But in that case Ansible would be more suited to upgrade the OS. One can always execute terraform plan first to see the execution plan. My recommendation is to let Terraform handle the basics, and have Ansible manage the details on VMs.

Alternatives: TF with DigitalOcean using the DO Provider: registry.terraform.io/providers/digitalocean/digitalocean/latest/docs .

All in all: Terraform can form a nice partnership with Ansible.