Open Source and The Theory on Brontosauruses by Anne Elk (Miss)

Preparing for a talk on our OSGeo.nl Day at the Dutch GeoBuzz Conference, I am trying to put in some slides on Free and Open Source Software (FOSS) for geospatial: why “FOSS is good” and why I live by it. The usual arguments on licensing, (not) price, feature comparison, collaboration contrasted with proprietary source are to me a, to be honest, a past, boring station.

Interlude: some younger readers (and non Python-programmers), may be puzzled: who the !&$# is Anne Elk ? Ok watch this Monty Python video first: 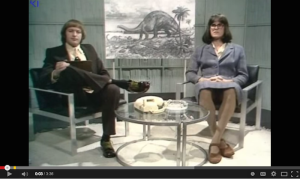 From my humble developer’s point of view software is always built on assembled and shared human knowledge codified in programming language lines, ultimately compiled into zeroes and ones running on a machine. Sharing knowledge has been always been key to human evolution. Someone invented building a fire long ago. I am always wondering how that knowledge was shared. Was it “licensed” with other tribes. How? Per fire? For the duration of the fire, or N fires per month? Was the original inventor awarded?

No well-established software developer team will start from a real “scratch”, i.e. first designing and “baking” all hardware, developing CPU-instructions, boot-loaders, operating systems, programming languages, libraries, frameworks etc, in order to develop their application. In general they use available knowledge, i.e. software, from the “giants” that developed those components before. The obvious metaphor is the pyramid: would placing the last stone at the top make the entire structure “yours”, as would be the proprietary software case? From the 1980’s on, for many a marketing manager, still the entire pyramid is sold a piece, as software became a valuable asset.

So in real-life, any smart developer team will Google for, and use any freely (FOSS) software available “out there”, usually being aware of any licensing constraints. Developing “from scratch” is something we did in the dark ages, or even further back, at the time of the brontosauruses.

Well, not that long ago. My career started in the 1985 working for AT&amp;T , later called Lucent , for 11 years, working on software for the 5ESS public telephone exchange . I am still grateful for that opportunity. From what I gathered at the time, both software and hardware were all developed “in-house”: the chips, the Unix operating system, the C, later C++ language, its compilers, the whole lot. Well, that is really “from scratch”. Luckily all these goods were later shared with the world. That is why we have Linux and Mac OSX (via BSD, NEXT, but that is another story) today.

But still, who is Anne Elk and what does The Theory on Brontosauruses have to do with all of this? My point is that, although in practice software is developed on the shoulders of “the pyramid builders”, i.e. “the giants”, proprietary software is often still traded in the high spirits of Anne Elk. Although some may be uttering: “we love Open Source, we use it all the time”, as to sell a fire… Only if you are like AT&T and many others at the time, “from scratch” comes close to the truth and may not itch…But for the true humans among us, sharing is us and where we came from.