The essence of this post is to illustrate via some web-apps the great topographic mapping done by Jan-Willem van Aalst using Dutch free geo-data. The summary/TL;DR is: 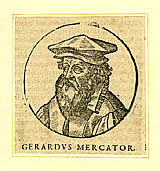 The Netherlands and Belgium have produced some influential mapmakers throughout history. Up to the 20th century the “Low Countries” were part of empires that ruled at the time. Mapmakers could be found in cities like Antwerp, Ghent and Amsterdam. I found an overview here , but there may be more authoritative sources. Mercator , was one of them, unaware probably of the later Google Mercator ;-)

Map-making has moved into the digital era. Anyone can render maps from source data, using attributed polygons, lines and points with some styling. Hmm, but there is more to the picture than meets the eye: maps have and always will be a combination of art, science and technology. 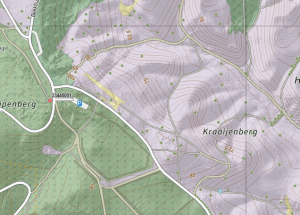 Every mapmaker, now and back then, is dependent on (accurate) map-data. Within the Netherlands we have been fortunate by having multiple free geo-data sources: OpenStreetMap (with several imports) and since 2012 Dutch topographic and cadastral geospatial data sources via PDOK , plus many others. These data-sources can all be combined, but this endeavour still requires a true mapmaker… 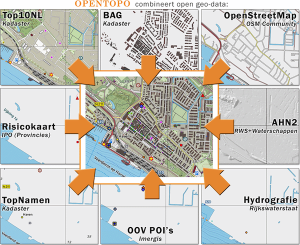 Jan-Willem van Aalst, via his website OpenTopo , tastefully combines Dutch open geo-data sources like OpenStreetMap , Dutch public data sources like: BRT (topography), Buildings (BAG) and “AHN”, Dutch height data (yes, we are not that flat!) into detailed and attractive topographic maps. His main editing tool is QGIS . Producing several resolutions up to 800 pixels/kilometer, the output is rendered as a series of straight TIFF files in various resolutions (up to 800px/km). 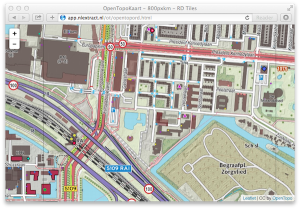 But how to make Jan-Willem’s results (TIFFs) available online? The NLExtract project aims to convert Dutch Open Geo-Data to manageable formats by providing tools and other services. For example the raw downloaded GML data for Dutch Address and Building Data (BAG) and the BRT Top10NL Topography data were first converted to PostGIS tables using the NLExtract ETL tools for use by Jan-Willem in QGIS.

In addition NLExtract provides downloads of converted and TIFF data and some apps to demonstrate transformation results.

In order to make the OpenTopo maps of Jan-Willem more widely available, I have provided both a tiling (TMS/WMTS) service for the maps plus some simple apps for browsers and mobile devices (tables/smartphones/phablets). These can be found at: app.nlextract.nl/ot , in particular the OpenTopoMap tiled in Dutch Projection . Thanks to Bart van den Eijnden for the Leaflet-Proj4s integration .

The following steps and technologies have been used within NLExtract to unlock JW’s raw TIFFs into tiled web services and demo-apps :

The source code for the above is mostly on GitHub . In a next blog I will dive deeper into the ETL/transformation processes, introducing Stetl, a generic ETL framework in Python .